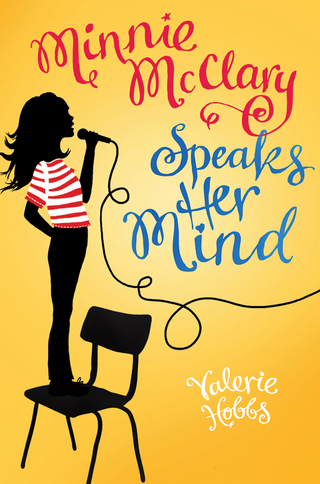 Sixth grade hasn't started out well for Minnie McClary. She lives in a new town because her father lost his job as a lawyer. She worries about her Uncle Bill, who after losing his leg in a helicopter crash in Iraq, lives in their basement and builds a model helicopter, trying to make sense of his war experiences. And Minnie's language arts class erupts in chaos every day, having already chased away four substitute teachers.

Minnie is a small girl with a big heart who fears that she may have already committed social suicide by shouting "Stop it" to her wild classmates. Surprisingly, everyone listened and stopped their shenanigans. After her outburst, however, Minnie quiets her voice, trying to blend into her new surroundings.

Life seems more promising when Miss Marks takes over Minnie's class. Wearing blue jeans and message-spouting tee shirts (LIVE OUT LOUD), Miss Marks looks more like a teenager than a teacher. She asks her students to fill their daily journals with meaningful writing and questions about life. Her goal is to teach her charges to write and think, which worries parents whose focus is standardized tests scores.

Valerie Hobbs has written a fast-paced story with a likeable heroine. As is the case with most sixth graders, Minnie struggles to figure out her own identity. Just in the nick of time, however, she finds her voice, coming to the defense of both her teacher and her friend.

Minnie McClary Speaks Her Mind is a thoughtful novel about learning to ask important questions, and stopping to think before jumping to misguided conclusions.