Amazon Kindle
TO BUY THIS EBOOK 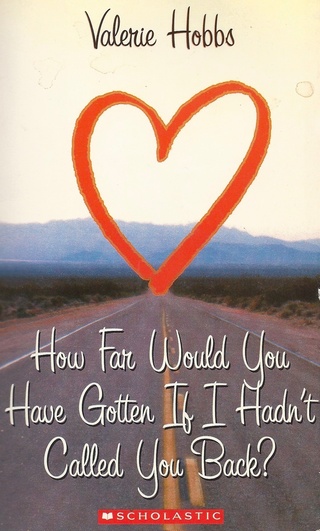 My first book.
Young Adult (12 and up) romance and mystery, published to starred reviews and a Flying Start award by Publisher's Weekly.

Reader reviews of How Far Would You Have Gotten If I Hadn't Called You Back?

A wonderful book for young women and their PARENTS!, August 26, 1999
As an adult I was very moved by the story, especially the insight into the thoughts of a young woman. There was a "true story" feeling in the Bron's experiences. A must read for parents of young people...lots of insight into the need to "belong". Hobbs has done a superb writing job!

I absolutely loved it., May 24, 1999
This is one of the best books I've ever read. It made me laugh and cry and fall in love with every bit of it. The author was so great and I hope that I can get to read more of her books, soon. I just loved it, if you haven't read it then you need to. You have no idea what you're missing.

This book was a good,inspiring story of a girls life., February 8, 1999
This book was one of the best books I have ever read. It was really inspiring to someone whose life just pretty much ended when they were forced to move to a different place then where they were brought up. It also showed lots of emotions that Bron was feeling toward all the people in her life. This book showed me the insides to people. What I mean is that you have to really get to know people before you can say that you dislike the person like Bron had to do with Will. She had to get to know him because at first she didn't like him.

An enchanting book for readers young and old...Laura F.'s, October 12, 2002
Bronwyn Lewis is a sixteen-year-old girl who has just been forced to move to Ojala, California with her family. The year is 1960. Bron is a good student, and has always lived life by the rules. It doesn't take long for her to realize if she doesn't change herself, she will not fit in with the carefree, easygoing teens in town. A popular interest of these individuals is drag racing, something that Bron wrongly thought she would never experience herself. Soon she meets J.C., an extremely attractive racer, and Will, a down-to-earth, old-fashioned country guy. She gets caught between them, and some interesting things occur with both men. I guess you could say she has a lot of things on her mind, including her reckless friend Lanie, the legendary horrific fires of Ojala, the profits of her family business, and her life's turn for romance and adventure. Hobbs really brings Bron's story to life through her dense plot and rising action. There is an overwhelming mood this book gives you through Bron's interactions with other characters. I really started to enjoy the book as the number of friendships and relationships Bron aquires increased. The ending really left me thinking because there is a distinct mystery to it. The genre is a combination of coming-of-age, adventure, and romance; no single genre would be fit by itself in my opinion. I really felt like I knew the characters personally as the plot thickened. I would definatly recommend this book to anyone. If an adult were to read it, he or she would have a good idea of the aspects of American teenagers' lives.

Great !, December 24, 1998
I am a teen and it sure hit home.Need more of her books.She says it like it is.TRUE !Us teens all shared it. It was like a lot of our friends.The 50's and 60's were a lot like now.Gee our grandparents went thtough a lot of stuff like us WoW !

THIS BOOK IS THE BEST TEEN NOVEL, June 12, 2002
I think this was a great book because it captured the life of a teen girl. Some thing she did reminded me of my friend who is exatly like Bron. I would recomend this book to everyone. I think adults should also read this book so they can get and understanding of a teens life. Some parents dont understand Teens. Eveyone but this book its worth reading.

Great book for adults as well as young adults, October 9, 1998
Valerie Hobbs's novel is a novel for all women, not just young adult women. It left me in tears at the end, good tears. I wished that it would never end. It's one of the best books I've read in years!

Great Book, June 26, 1998
This book was a well written book by a fantastic author! It in it's own way sends a message to a reader that will leave an impact on them, I know it did on me. It accuratly displays the life of a teenager in a world that is sometimes difficult to live in. It leads to unexpected turns and the outcome is well written. Good job to Ms. Hobbs.